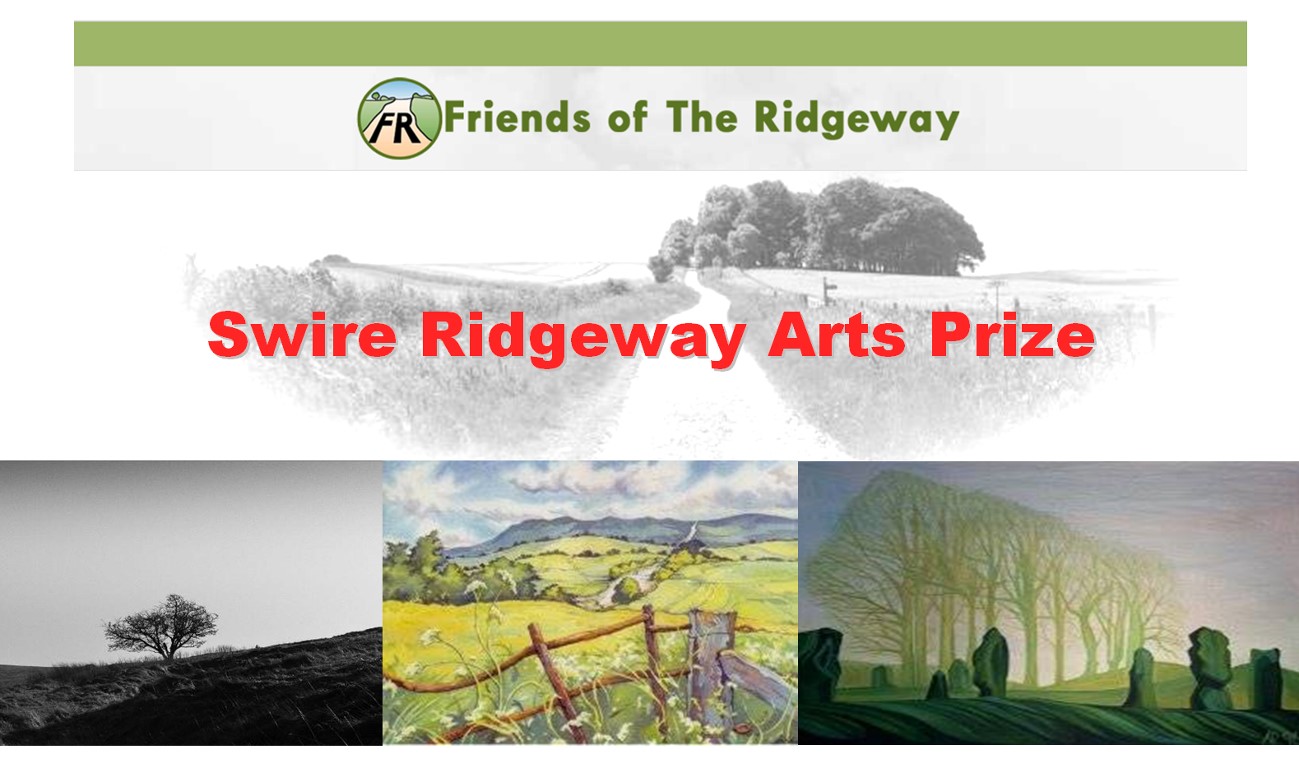 The Swire Ridgeway Arts Competition for 2017 was announced at the Friends of the Ridgeway AGM on Sunday 24 April 2016 in Goring. A Flyer about the competition, the rules and Entry Form were issued in the summer of 2017, with copies distributed to Clubs and organisations along the ridgeway corridor. The first entry was received in January 2017 and over the coming weeks entries came in to reach a total of 70 overall with 7 written, 1 sculpture, 11 photos and 51 paintings. Entries came predominantly from the Wiltshire and Oxfordshire ridgeway corridor but included entries for as far afield as London and Exeter.

The Exhibition and Prize giving for the Swire Ridgeway Arts Prize was held over the weekend of Saturday and Sunday 22 – 23 April 2017 in the Thomas Hughes Memorial Hall, Uffington, located in the centre of the beautiful and historic rural village of Uffington in the Vale of the White Horse.

The intention was as far as possible, to exhibit all works submitted as part of the Ridgeway Friends Day subject to availability of space and to the Friends of the Ridgeway discretion. In the event all works were exhibited making a wonderful and varied exhibition of art works inspired by the Ridgeway. A large thank you is due to all entrants for submitting works; there was wonderful entry enabling a comprehensive exhibition to be mounted including a large variety of works not only between categories but within the individual categories. The Judges were very complimentary about the variety and quality of the work exhibited.

There were at least 173 registered visitors (probably more, as some will have slipped through the net!); and there were many comments on the variety and the high quality of exhibits, and the standard of presentation.  The ambiance of the exhibition was enhanced by excellent catering provide by volunteers for the Leprosy Mission.

Many of the works in the exhibition were for sale.  Throughout the two days of the exhibition, 6 paintings were sold and obe photograph for an aggreagte value of approaching £1,000. Commision on these sales has gone into The Friends of the Ridgeway funds.

(a)    Dorothy Burrows, Chair of Judges. Dorothy, a former drama teacher with a passion for storytelling, theatre and writing, has been involved in local community events for many years and has been the director of the Betjeman Festival.

(b)    Clover Stroud, written work judge. She is a local author of the Ridgeway memoir ‘The Wild Other’; she writes for the Dailey Mail, Sunday Times, Daily Telegraph and Conde Nast Traveller amongst others.  She lies in Oxfordshire with her husband and five children.

(d)    Anna Dillon, painting judge. Anna Dillon grew up in the Wiltshire village of Winterborne Monkton, about one mile from the World Heritage site of Avebury, close to the Ridgeway. She studied illustration and Graphic Design at Falmouth School of Art in Cornwall and then worked as a graphic designer for over 15 years in London and the Middle East. She is now a full time, professional artist.  Her work is regularly exhibited and she also has work in private collections around the world from Australia to Finland. From 2010 she was coordinator for Oxfordshire Artweeks, becoming a Director in 2015.  Her work can be seen at http://www.annadillon.com/index.html 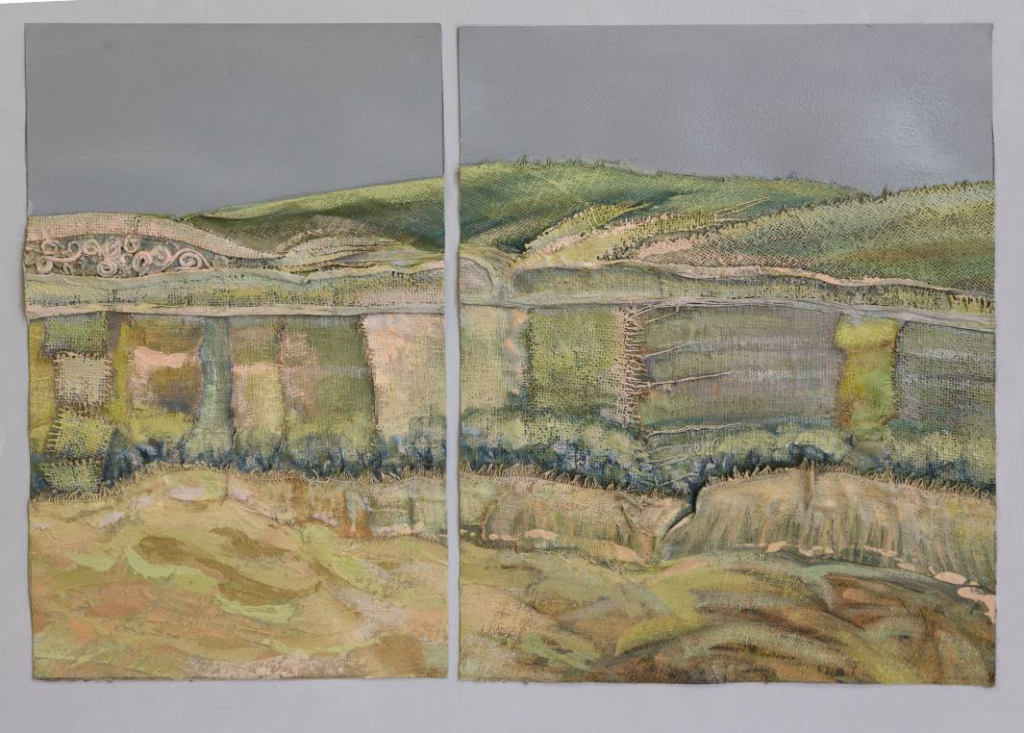 For the written work category, Clover Stroud said “There were some wonderful entries for the written prize but The Oldest Road stood out as a winner for the way it communicated the epic human history of the Ridgeway. It is a powerful and evocative piece of writing reflecting the powerful and unique environment of this extraordinary local area.”

THE OLDEST ROAD by Gill Learner 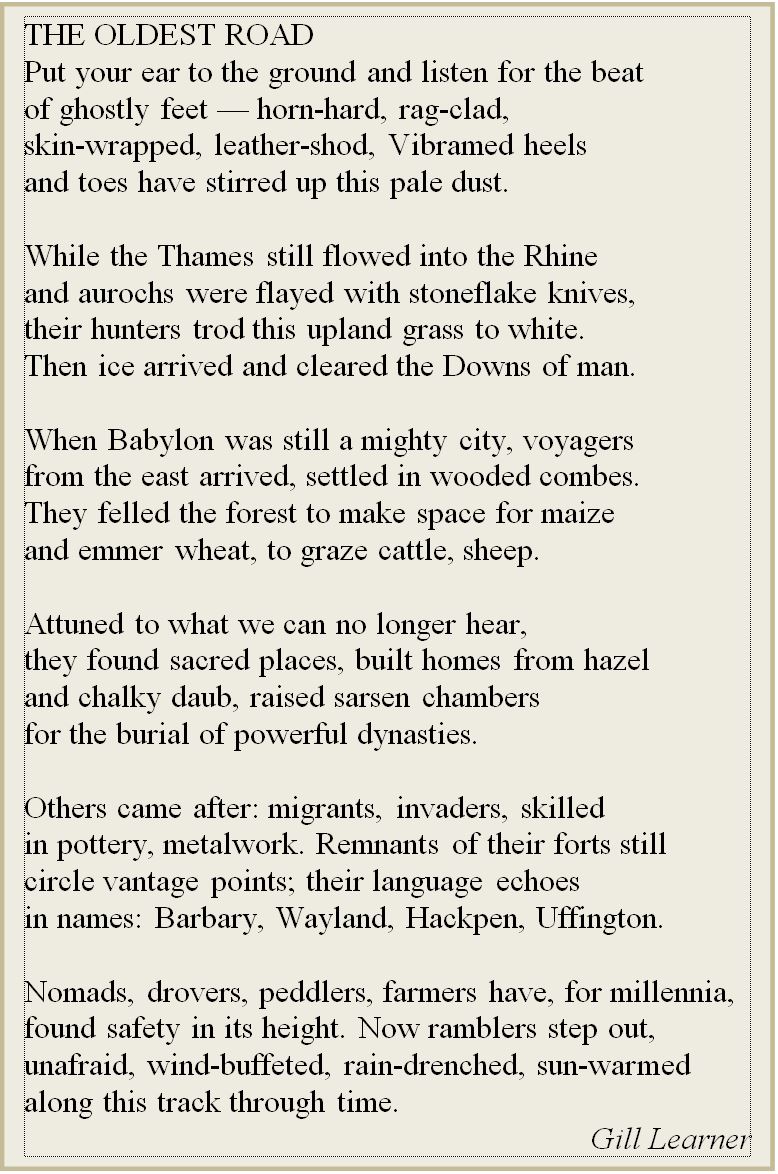 The winning photograph was judged to best reflect the Ridgeway landscape, history or ecology. It shows the track and landscape with the various alternative land uses over the centuries with a view of Uffington Fort and agriculatral field. And there is even a bird on the sign post in the foreground. 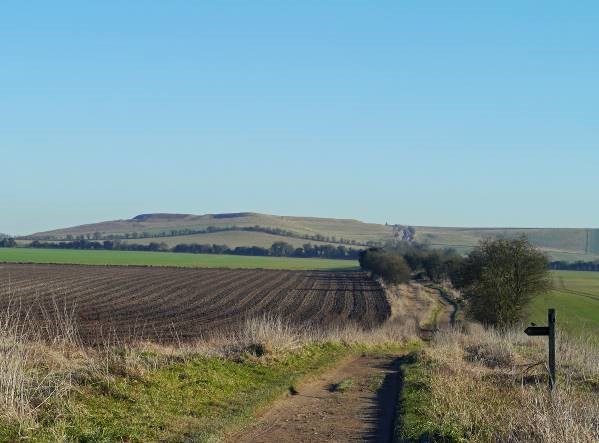 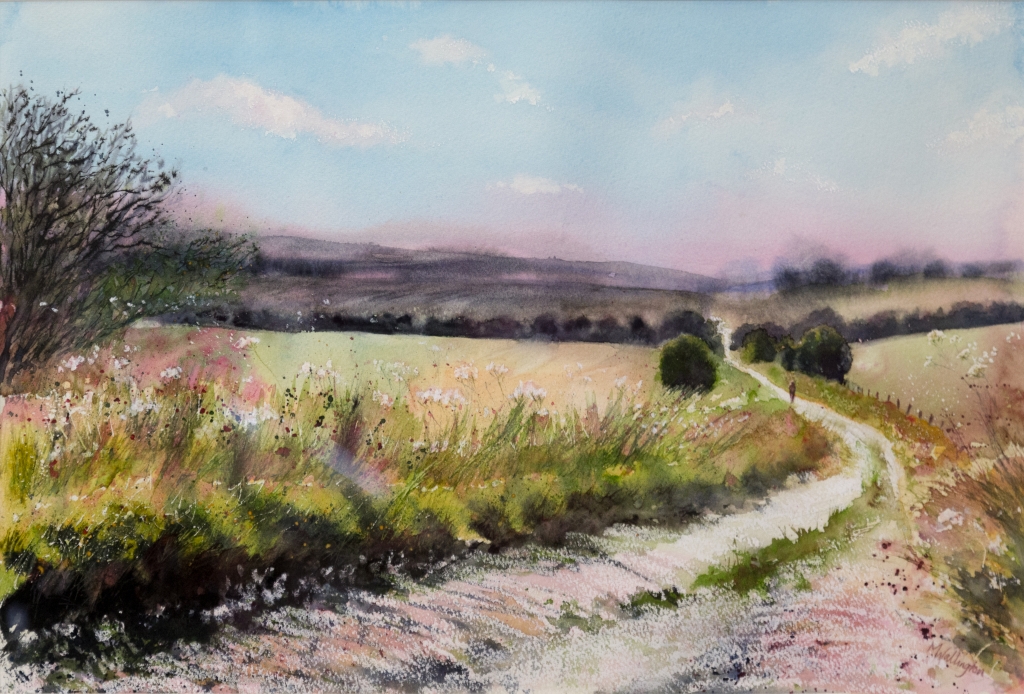 Anna Dillon commented on the high standard of paintings submitted and how hard it was to choose an overall winner. Susan Ganney’s watercolour of the Manger at Uffington caught the judge’s eye for its fresh and impressionistic style. And Jane Duff’s atmospheric paintings captured the spirit of the Ridgeway landscape. She said “Lawrence Ward’s painting of ‘The Ridgeway from Uffington Castle’ captured the spirit of the Ridgeway because of its composition, its connection with the Ridgeway track and surrounding landscape, it’s response to the ecology by way of enabling the viewer to imagine walking along the trail on a summers day, listening to the skylarks above and finally, because of its technical merit in being an extremely accomplished painting”. It was felt to be a wonderful piece of painting.

There was much debate amongst the judges about the overall winner. Anna Dillon commented that “Susan Klemencic’s  ‘Views of Ridgeway’ was selected by all the judges because of its originality and unique approach to representing the Ridgeway in an abstract way and also in its use of medium as a mixed media piece which used textiles, paper and paint on board. A fresh, unique, contemporary work.”  Dorothy Burrows as Chair of Judges “In selecting an overall winner, the judges were looking for a work which imaginatively evoked that feeling of walking along The Ridgeway.  After a lively discussion, we agreed that the use of texture, cross-sections and colour in Susan Klemencic’s ‘Views of Ridgeway’ fulfilled the criteria most fully. Congratulations are due not only to the winners but to all the entrants for contributing to this enjoyable and thought provoking exhibition”.

Introduced by Lord Bradshaw, Sir Adrian Swire presented the prizes to the winners. And after the prize giving a cream tea for all at the exhibition. We were all delighted with the success of the Art Prize over the week-end.  For this the Friends of the Ridgeway owe a real debt of gratitude for all the hard work and organisation, but most particularly also to Anna Dillon, who not only contributed her professional advice, but also worked very hard in setting up the art works.