The Ridgeway and Great Chalk Way

The Friends of the Ridgeway was set up with the principal objective of preserving for the benefit of the public all the natural aspects and features of the Ridgeway National Trail. It was soon realised, however, that this was too narrow an interpretation of the name ‘ridgeway’, with the result that the charity’s objectives were expanded in 2009 to embrace all of the ancient ridgeway trackways along the chalk downs of southern England. An examination of a geological map of England reveals that these trackways closely follow a ridge of chalk which extends from Lyme Regis on the Dorset coast to The Wash in Norfolk. The Friends of the Ridgeway decided that the most effective way of fulfilling its expanded objective was to create a long-distance trail along the entire length of this chalk ridge. We have given this the name ‘The Great Chalk Way’, which of course has the Ridgeway National Trail as its central and best-known long-distance component path.

By the early 20th century Britain’s widespread industrialisation and its ever-expanding cities and towns gave rise to a demand for public access to the countryside. By the 1930s, following conflicts between landowners and members of the public seeking much greater access to the wide open spaces around them – typified by the mass trespass on Kinder Scout in the Peak District in 1932, which led to the imprisonment of five men – pressure was at breaking point. In 1936 the Standing Committee on National Parks urged the Government to create a number of national parks, and in 1945 a committee was set up under the chairmanship of Sir Arthur Hobhouse to prepare the way for the relevant legislation. The National Parks and Access to the Countryside Act was passed by Parliament in 1949, and the National Parks we have to enjoy today were the result.

National Trails were effectively a by-product of this process. Tom Stephenson, a Ramblers’ campaigner, was the driving force behind the establishment of the first National Trail, the Pennine Way. This was opened in 1965, but it had taken thirty years for him to realise his dream. Others followed, including the RNT, and there are now 19 National Trails totalling 3,200 miles in the UK, the longest of which is the South West Coast Path at 630 miles (although this will be easily overtaken by the England Coast Path when this is complete). They pass through some of the best landscapes the UK has to offer, and represent the ultimate in long distance walking. Initially they were managed by a semi-independent civil service department according to a set of quality standards, but each park is now managed by its own partnership. For more information on the RNT’s governance and funding, see The Ridgeway Partnership under the About tab.

The 87 miles of the RNT are packed with interest and some magnificent scenery. It passes through two Areas of Outstanding National Beauty, The Chilterns and the North Wessex Downs, which are very different from each other, but complementary. Starting at Ivinghoe Beacon, near Tring, it passes through a varied landscape of open downland and chalk escarpment, agricultural land and woods, on footpaths, bridleways and tracks. The route skirts Wendover Woods before climbing Bacombe Hill on the way to the top of Coombe Hill. It then goes intriguingly close to Chequers, the Prime Minister’s country estate before heading for Princes Risborough, ascending Lodge Hill and skirting Chinnor. On the next stage to Watlington it passes under the M40 by way of a concrete tunnel. The next few miles to Wallingford are amongst the most scenic on the whole route. At Wallingford the Trail meanders along beside the Thames, which is eventually crossed at Goring and Streatley (this is the only conurbation the Ridgeway goes through).

The landscape now changes to one of wide tracks capable of accommodating flocks of sheep – these are the ancient droveways, on top of escarpments, often with fine views stretching into the distance. One down succeeds another with the only buildings along the route being those of farms, although there are several monuments to worthy people. And it is wonderfully quiet, the calm only being disturbed by the occasional farm machine, and the chirruping of birds.

This part of the trail is imbued with ancient history. Some three miles south of Wantage it passes Segsbury Castle, an Iron Age hill fort, and a few miles further west another hill fort comes into sight, Uffington Castle. But probably a much better-known attraction close by is the Uffington White Horse hill figure. This is thought to have been a feature on the hill fort for at least 3000 years, making it by far the oldest of England’s white horse hill figures. Although there are any number of barrows and tumuli dotted around the countryside to both the north and south of the trail, perhaps the most eerily impressive barrow is Waylands Smithy, only a mile or so from the White Horse and right next to the trail.

Along the section after Uffington, the villages of Ashbury and Bishopstone are close enough to the RNT to be easily accessible for provisions and accommodation. The M4 is crossed on a bridge, then there is a climb  on the other side up to another hill fort, Liddington Castle. The route then veers south towards Marlborough, but crosses the arrow-straight A346 (a Roman road) well before getting there, at Ogbourne St George. After a gradual ascent back up onto Coombe Down and along Smeath’s Ridge on the other side, it passes right through the centre of Barbury Castle, the best preserved and most imposing hill fort along the entire route. It is then but a few miles to the end of the RNT, where it meets the A4 at Overton Hill, with The Sanctuary just on the other side. This is the furthest outpost of the World Heritage Site of Avebury, which has the largest stone circle in existence, and it is well worth spending a few hours there after finishing the RNT.

The series of byways, bridleways and footpaths, interspersed with the occasional road, which make up the Great Chalk Way, has often been called Britain’s oldest road. It is thought to date from at least Neolithic times (c4000 BCE), when the safest routes for travellers, avoiding the impenetrable valleys below which were said to be home to fierce creatures, were the relatively treeless ridgeways running along the escarpments above them. The ridgeways were routes over high chalk uplands where you could see where you were going, and where the ground was easier to cross.

The geological map shows a band of underlying chalk running diagonally across southern England from East Anglia and The Wash to the Devon and Dorset coasts. The central and southern parts of this band form the great escarpment of the Chiltern Hills and the Wessex Downs. Upland trade routes from the centre of the Wessex civilisation led north to the Cotswolds, east along the North Downs to Surrey and Kent (The Harroway), and south-eastwards to Winchester and the South Downs. But the main artery led south and west to the harbours of Devon and Dorset, and north-east towards East Anglia for some 360 miles from coast to coast along the edge of the chalk, and this great highway we have called the Great Chalk Way.

As noted above, this was never a single, designated road but rather a complex of braided tracks, with subsidiary ways diverging and coming together. Successive ages made use of the route for their own purposes, and left the marks of their passage. Pre-historic barrows and burial mounds, like Wayland’s Smithy, line the route, and excavations have found implements and ornaments from many different sources.

As the land lower down the slopes was cleared, a lower route became feasible in summer, closer to the spring line where water was accessible to travellers and their mounts. While the ridgeways followed the top of the downs, the Lower, or Icknield Way, runs parallel to them, just above the foot of the slope, as far south as Wanborough near Swindon. To the north of the Chilterns, where the chalk is flatter, the routes came together. The Icknield Way was used and upgraded by the Romans for much of its length for both trading and military purposes.

The Ridgeway National Trail links many of our finest hill forts and monuments, such as Barbury Castle and the Uffington White Horse. It is today believed that the hill forts were not primarily used for defensive purposes, but were rather used as community centres in which Iron Age tribes or clans gathered for worship, feasting and to trade livestock, crops and other goods. However they provided a convenient defensive line of redoubts linked by the Ridgeway when the Romanised Britons were under threat from Saxon invaders, and later again for the Saxons themselves against their Danish and Norsemen foes. In the modern era, traffic on the RNT declined, and its main use was as a droving route, until its rediscovery as a precious resource for access to the countryside and our ancient heritage.

As with the ancient original, our modern version of the Great Chalk Way makes use of several existing long-distance paths (LDP), and one new one, so can be considered to be a ‘family of LDPs’. Starting at its southern end, it follows the Wessex Ridgeway, from Lyme Regis on the Dorset coast to Win Green, one of Wiltshire’s highest points. This LDP was devised by Priscilla Houstoun of the Ramblers Association (as it then was) in the 1980s, as refreshed and waymarked by Dorset County Council, which declared it officially open in August 1994. The Great Chalk Way makes use of 66 miles of the Wessex Ridgeway. The Council issued a comprehensive digital guide to its route, history and wildlife in Dorset in 2009.

From Win Green the route turns east towards Salisbury on a newly created trail, the Cranborne Droves Way. This consists largely of two ancient droving routes, the Ox Drove and the Old Shaftesbury Drove, and passes through the Cranborne Chase Area of Outstanding Natural Beauty (as its name suggests) to finish in Salisbury, outside the cathedral. The Cranborne Droves Way is 16.5 miles long.

The route then proceeds northwards along the Sarsen Way, which follows two existing Wiltshire LDPs, the Pewsey Avon Trail and the White Horse Trail, for almost its entire length. On leaving Salisbury via Old Sarum, the site of the ancient settlement of Salisbury, it meanders through the tranquil and scenic Avon valley, passing through Amesbury on the way, then pays a brief visit to the edge of Salisbury Plain before descending to make its way along the Kennet and Avon canal, past the Alton Barnes White Horse and across the medieval defensive earthwork of the Wansdyke, to join up with the Ridgeway National Trail at Overton Hill. The Sarsen Way, excluding the Cranborne Droves Way, is 34.5 miles long.

The Icknield Way Path was devised by the Icknield Way Association on a route which minimises road walking but still stays as close as possible to the ancient way. It continues from where the Ridgeway National Trail ends, at Ivinghoe Beacon, and ends at Knettishall Heath, near Thetford, where the Peddars Way takes over the baton, a total of 110 miles. It transports the walker through some delightful countryside, including the Chilterns and Breckland, often with some striking panoramic views, into some charming villages and along miles of beautiful green lanes. Places of interest and towns along its route include Whipsnade Zoo, Dunstable, Luton, Hitchin, Letchworth, Baldock, Royston, Linton Zoo, the Cavenham Heath National Nature Reserve and Euston Hall.

The last link in the chain is the 49-mile Peddars Way. As it is a National Trail, it is well waymarked with the distinctive acorn logo (as is the Ridgeway). It follows a Roman road from Knettishall Heath Country Park to finish officially at the small settlement of Holme-next-the-Sea, but in practice Hunstanton is normally regarded as the final destination, being the nearest transportation hub. 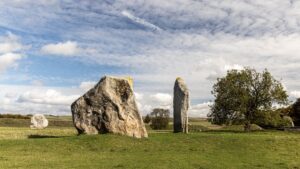 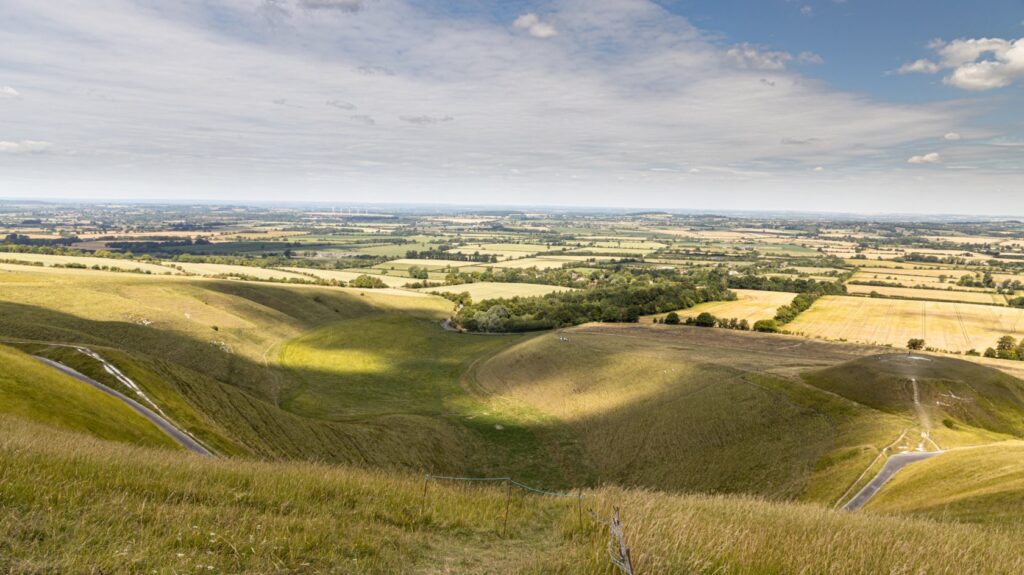 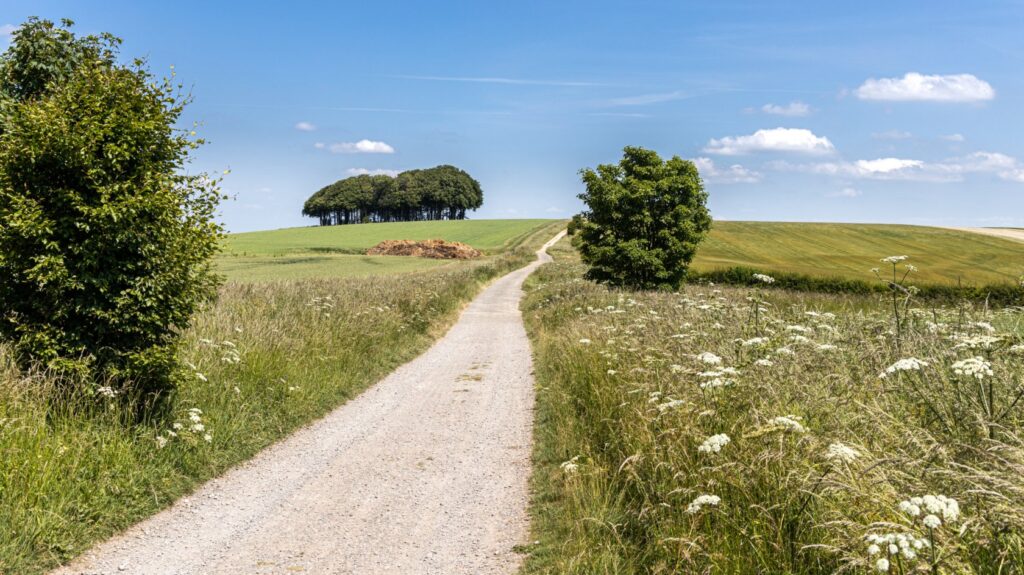 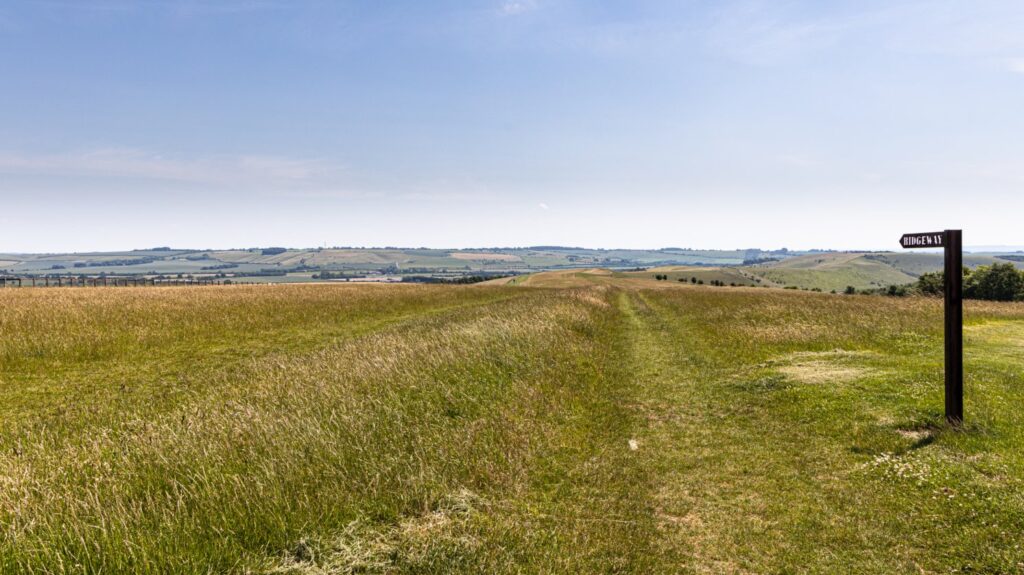 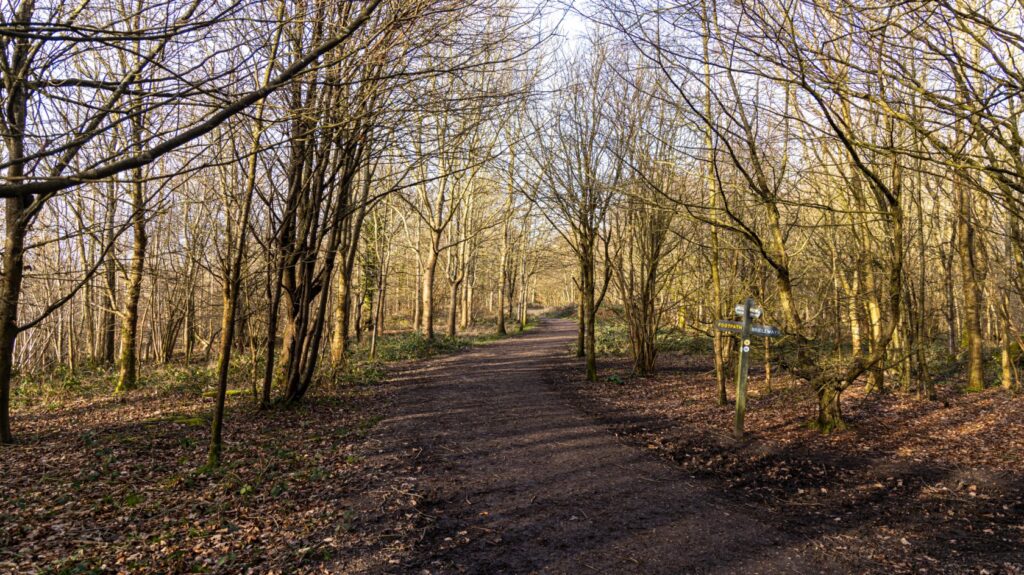