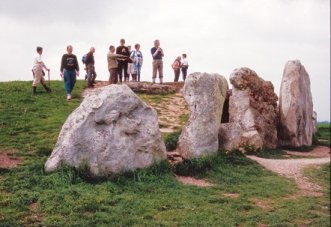 Today’s Ridgeway follows the route that has evolved gradually since the early 5th millennium BC to link the Wessex region – and beyond, south and westwards – with East Anglia and the North Sea. It is part of a network of such ways which, following higher, less forested ground, gradually made it possible for people on foot, sometimes with draught animals and, in due course, on horseback, to traverse the land.

In ancient times such lines of approach would have appeared as concentrations of irregular pathways, impressed gradually upon the countryside as communities developed more complex needs for social contact and exchange. Driving flocks and herds between winter (upland) and summer (lowland) pasture and watering would also have been a major factor in their evolution. It must be understood that all such routes worked in conjunction with rivers and streams that were navigable to shallow-draught wooden dugouts and small coracle-like skin boats.

The Ridgeway and the Icknield Way (which follows the springline along lower ground immediately to the north) provided choices for travellers, traders and warrior bands moving through this broad corridor of fertile, easily traversed chalk downland. The Thames, cutting across it through the Goring Gap, was fordable between Moulsford and Streatley, and allowed access to the Midlands and to the sea.

The Ridgeway of today, constricted and fenced, dates broadly from the 1850s. It overlies prehistoric and Romano-British fields and settlements along its route. Yet documents and other evidence show that from early Christian times, trackways close to its present route were much in use and were influencing the layout of parish boundaries.

“Europe’s oldest road”, the Ridgeway may not be, but there is no doubt that today’s precious public footpaths and rights of way, wherever you find them, are reminders of the ways and the directions in which our remote ancestors went about their daily business.
This ancient route became associated with Neolithic chambered tombs, Bronze Age barrow cemeteries and spectacular Iron Age hill forts.

Wayland’s Smithy long barrow, with its complex stone burial chambers and long history is one of the finest in chalk country. On Overton Hill and at Lambourn there are magnificent round-barrow cemeteries which demonstrate the distinctive shapes evolved during a prosperous period in our prehistory.

Overton and Fyfield Downs preserve outstanding remains of prehistoric and Roman agricultural landscapes – not forgetting the experimental earthwork built for long-term study in the 1960s.

Significant hill forts include Barbury, Liddington, Uffington (with its broadly contemporary white horse), Segsbury and Alfred’s Castle: excavations have now established that all were permanently occupied over several centuries before the Roman invasion.