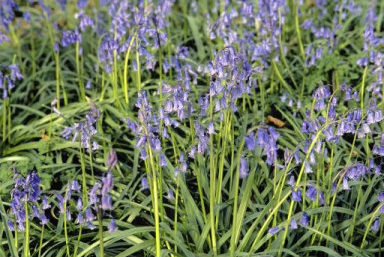 Crossing over chalk hills, The Ridgeway passes grassland, woodland, arable and watercourses where a variety of flora and fauna can be seen. The diversity is further accentuated by the different aspects of hillsides and earthworks, and the deep coombes create micro-climates. Compared to most parts of southern Britain, the upland area is slightly warmer in summer and rather colder in winter.

Chalk grasslands are some of the richest and most interesting habitats in the country. Today only a fraction of the historic grazed downlands remain along The Ridgeway; most was lost in the 20th century as a result of changing agricultural practices, which accelerated during and after the Second World War. However, The Ridgeway offers an opportunity to discover extensive areas of rich chalk grassland managed to maximise biodiversity interest, such as Aston Rowant National Nature Reserve. Chalk grassland flowers such as Greater Knapweed, Agrimony and Field Scabious can be spotted in the verges of The Ridgeway.

The beech woodlands in the Chilterns and clumps of beeches on round barrows in the North Wessex Downs are a distinctive feature of the area. Chiltern beech woodlands are associated with plant species that can grow in shady conditions, such as the rare Coralroot, and also the Stag Beetle.

The Ridgeway passes beside the River Thames and also chalk streams such as the River Og. Chalk streams are fed from the chalk aquifer which makes the water rich in minerals and maintain a fairly constant temperature year-round. This lets diverse aquatic plants grow, including various species of Water-Crowfoot and Water Star-Wort. The plant diversity and good water quality supports many invertebrate and fish species.

Beyond the nature reserves and other designated nature conservation sites, the farmed landscape provides habitat and food for wildlife along the hedgerows and field margins and in the field corners, small copses and ponds. Many farmers in the area are managing the land to produce food and other products in a sustainable way. As well as the generalist species such as Fox and Rabbit, The Ridgeway area is home to less common species including specialist farmland birds and the Brown Hare.

For more detail on flora and fauna click on the links in the menu bar.