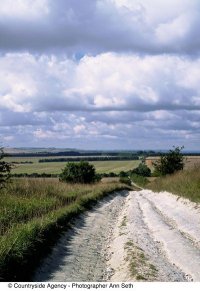 A walker on The Ridgeway very soon becomes aware how exposed he can be to the changeable English weather, and learns that The Ridgeway has its own particular weather features that can strongly affect his walking experience, both for good and for the contrary!

As its name implies, The Ridgeway follows the high chalk escarpments of the Chilterns and then of the high Lambourn Downs, open to the northern scarp overlooking the Vale of White Horse, and, further south, from the Marlborough Downs north-westwards over the Lower Chalk towards the upper Thames Valley.  These elevations and the formation of the land have a significant effect on weather patterns.  See below for a background note on the Weather of The Ridgeway by the Royal Meteorological Society, and for a link to them.  The RMetS Chief Executive, Prof Paul Hardaker, writes a great weather blog; read it at www.rmets.blogspot.com.

The Ridgeway must be one of the best places in Southern England for connoisseurs of cloud formations, as they build up over the downs and over the Cotswolds to the north of the Vale. Aficionados will feed their addiction by visiting www.cloudappreciationsociety.org.

The wind is a feature that soon impresses itself upon the walker, particularly along the high and largely treeless downs to the west of the Thames.  Here the wind has free space to build up its strength, and the prevailing westerlies, often bearing rain, sweep across the tops of the downs and along the length of the open trail.  It is for this reason that many prefer to walk The Ridgeway from west to east, although many hardy souls prefer the wind in their face and the different views and experience of walking westwards towards Avebury. Wind direction can be monitored via occasional wind vanes that may be seen along the route. A fascinating history of wind vanes may be seen here.

Whichever direction you choose, and whatever the season, suitable clothing is essential; and don’t forget a hat! In the summer, the downs can be refreshingly cool, but the sunshine can be a real problem.  Don’t forget the lotion and cover up exposed skin.  The route along the escarpment is remote from the villages and their facilities at the foot of the slope.  It is essential to carry water and to avoid dehydration.

Walkers will want to get up-to-date information on the weather to be expected along the route.  Detailed forecasts can be obtained from the BBC Weather Centre at www.bbc.co.uk/news/weather, from the Meteorological Office (www.metoffice.gov.uk), and also from Metcheck (www.metcheck.com), uk.weather.com  and many others.  For really local and specific information in Wiltshire, with live and recent weather history, however, try http://www.legresley.me.uk/weather/foxrow.htm.

Weather along the Ridgeway

Information prepared by the
Royal Meteorological Society and Philip Eden

Weather is a significant, always changing part of our daily lives and both the public and meteorologists are interested in measurements or observations of temperature, precipitation, wind, frost and fog. Local factors, such as typography (the height and shape of the land), can affect the weather of any particular area and the Ridgeway is no different. Various aspects of the weather in the Chilterns are described below.

Temperature
There is a normal decrease in air temperature with altitude (height) at an approximate rate of 1°C per 100m. So the highest parts of the Chilterns, such as Haddington Hill, not far from The Ridgeway, which stands at 257m or 876ft above sea level, will experience temperatures approximately 2.5°C lower than the surrounding areas, such as those of the Thames Valley.

Rainfall
The largest changes in rainfall in small areas are caused by the presence of hills; this is know as orographically enhanced rainfall and can lead to a 30% increase in precipitation. The prevailing wind from the southerly and south-westerly direction causes 800-850mm of rainfall on average per year over the higher areas of the Chilterns, such as Ivinghoe Beacon and Coombe Hill (at approximately 250m above sea level), compared to an average of 650mm in the Thames Valley and the Vale of Aylesbury.

Snow
The decline in temperature with altitude is matched by a rise in frequency of snow falling and snow lying. There is a large difference in the number of snow-lying days between 50m and 250m altitudes. For example, there are on average 6 snow-lying days per year at Kew (west London), 9 in Reading and 15-20 over the high Chilterns.

Fog
Radiation fog and hill fog both affect the Chilterns and a brief description of the two main types of fog are initially needed here.

Radiation fog forms when the sky is clear and the wind speeds are light (1-5 kilometres per hour). This type of fog usually forms at night and dissipates (disappears) during the day. In mid-winter, however, particularly in latitudes where the sun is low in the sky (e.g. north-west Europe), it may stay all day. It commonly forms in the dips with sources of moisture such as streams and rivers. Radiation fog is particularly common in autumn and winter in the UK.

Hill fog is formed by air being forced to rise over an upland barrier. Once the air rises it cools and the air can become saturated with water particles to form fog.

The high Chilterns have fewer days of radiation fog than the lowland surrounding areas, and as shown in the photo here the tops of the hills sometimes stand out above the fog below. 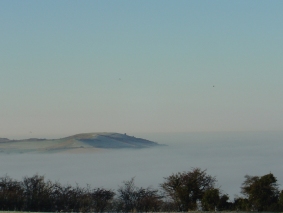 Ivinghoe Beacon standing clear of a sea of fog in the Vale of Aylesbury, 20 Dec 2006 (Copyright Philip Eden)

However, there is more frequent hill fog when high ground is shrouded by low stratus cloud (as shown on the picture to the left), and this more than balances the reduction in radiation fog, so that overall the frequency of fog is greater over high ground than over low ground.

The frost hollows on the Chilterns are notorious but higher crests of land such as Haddington Hill are likely to experience a much shorter frost season.