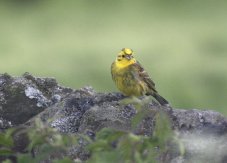 Birds of prey likely to be seen are buzzards and red kites. Buzzards are stocky birds of prey that above with wings outstretched and tails fanned out. They may also be seen perching on poles or fences. Red kites fly higher up, dark silhouettes with forked tails. They are more numerous east of the Thames, where they were successfully introduced some years ago.

Familiar garden birds can be seen in the lower parts of The Ridgeway, especially the wooded areas, and many small birds frequent the higher parts in summer. The Yellowhammer is a slim long-tailed bird often found in small groups with finches and sparrows on grassy spaces and farmland hedgerows. Males typically perch on bush tops or posts, repeating their simple metallic song all day long all summer. The Skylark can be heard on a clear day, singing its beautiful warbling song from high up in the sky (even to 100m) over wide areas of grassland. It is a smallish bird with unremarkable brown streaky colouring and difficult to see high above. Linnets are small slender finches with a light dancing flight, often seen in flocks on open farmland. They feed mainly on seeds on the ground beneath vegetation. Their song is a musical, fast, repetitive medly of whistles and warbles. A common bird over open countryside is the Meadow Pipit, small with a distinctive streaky appearance and a song of light musical trills. It has a nervous and frenetic disposition. It feeds on the ground, but may suddenly fly up and away if disturbed.

At ground level, grasses are obviously the most prolific plants.  There are numerous types, so it is worth taking a pocket guide with you.   Look out for Orchids flowering in June and July.  They like to grow on dry chalk grassland or in open woodland. The common spotted orchid is white with pinkish spots;  the  pyramidal orchid has a spike of dark pink flowers densely shaped like a pyramid;  the rare bee orchid has a large lower lip like a bee.  Cranesbills are part of the Geranium family; they have deeply lobed leaves and pretty flowers, pink or blue, and they will grow almost anywhere.  You may spot a Purple Gentian, a small plant with stout stems and flower clusters between leaf and stem.  Gentians prefer a damp spot with plenty of light, like meadows and open woods.   Many varieties of Vetches grow in the hedges and scrub.  They are part of the pea family, thus they have trailing tendrils for climbing.   Flowers vary from blue through pink.   Other flowers you may see include Bird’s foot trefoil with yellow-orange flowers growing low on the ground;  Bellflowers such as the blue harebell;  blue or mauve Scabious;   tall upright Campions with pink or white flowers;  little Milkwort plants with delicate blue flowers;  and Yellow rattle, an upright plant with nettle-like leaves and yellow flower tufts at the top, growing in rough grassy places.

Butterflies may be seen on a still sunny day.  Many of their caterpillars feed on the chalk grassland plants, e.g. marble white (grasses), small blue (kidney vetch), common blue (bird’s foot trefoil).   Others you may see are the small blue, common blue, meadow brown, skipper, brimstone, and small tortoiseshell.   Rarer butterflies include adonis blue, chalk hill blue, some fritillaries, and the silver spotter skipper.   A pocket guide is useful here as the differences between them are often difficult to identify, particularly with the variety of brown butterflies.

Animals are about but usually keep a low profile.   You may be lucky to see a  stoat, weasel, fox, badger, small deer, or hare.  More common animals are rabbits and grey squirrels in the woods.