Members gathered for the AGM held this year at The Vale & Downland Museum, Wantage, on Sunday, 26th April, in anticipation of a significant turning point in our history.  Besides the expected briefing on the new Ridgeway Partnership, our long-serving Chairman, Ian Ritchie, would be standing down.

The weather had defied dire predictions and turned out fine and bright.  The Museum was a new venue for us, and it provided an interesting and welcoming space.  There were delicious cakes on offer as well as teas, coffee and other refreshments.

Our Chairman opened the proceedings with a detailed briefing on the evolution of the recently launched Ridgeway Partnership, explaining the Committee’s decision to participate in the new management arrangements.  The Ridgeway and Thames Path Trails will be managed separately, and users and other key stakeholders will be involved alongside the AONBs and local authorities.  We now have an opportunity to develop a better known and more widely used Ridgeway, reflecting the needs of local communities and visitors. A full-time Ridgeway Officer is being recruited, and Ian has accepted election as the first Chairman of the new Partnership.

The strategy for promotion and development will feature five themes; the Natural, Ancient, Sporting, Living and Creative aspects of The Ridgeway.   It is hoped that each of these will strike a chord with potential new users.

A wide-ranging discussion ensued, with members concerned to strengthen the appeal of The Ridgeway to the younger generation, through Scouts, schools and other youth groups.    Questions as to the future role of the Association within the Partnership and its financial situation raised the possibility of The Friends acting as a fund-raising body for the new Partnership, developing new sources of finance such as sponsorship, supporters groups, licence income  and access charging.  The plans for this new role found general support, and the Committee was encouraged to press ahead.

After a short tea-break, Ian called us to order for the formal AGM, noting that a quorum was present, so that last year’s proceedings could be ratified.  Speaking to the Trustees’ Report, Ian noted that The Great Stones Way remains unfinished business for him, but that he will continue to lead the resumed discussions with local interests.   He thanked the Committee and other supporters for their efforts, with special mention of David Axford, who is standing down after 7 years’ service.  Ian presented David with a book as a small memento.

Our Treasurer, John Edgerton, then presented the Accounts, showing a good year for the Association’s finances, largely due to the very generous donations by one of our members. He also mentioned the move of our main bank account to CAF Bank.  With reserves now replenished we should be able to weather any leaner years.

Proceeding to elections, the remaining officers and Trustees were unanimously returned, with three vacancies unfilled, including that of Chairman.  Ian announced, however, that he and Secretary Jeff Goddard had just this week met a very suitable candidate as his successor, whom they would be introducing to the Committee at its next meeting, recommending him for co-option as acting Chairman, pending his election next year. 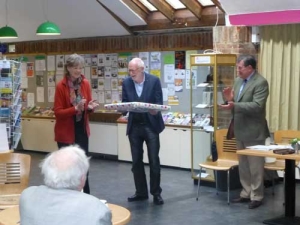 Our President, Lord Bradshaw, then spoke, noting that Ian’s retirement is indeed the end of an era, and commending him for his tireless efforts.  His success in obtaining the protection needed by The Ridgeway and other green lanes was an enormous achievement, on which the current campaign for further protective legislation will seek to build.

Ian was then presented with a framed and mounted print of a painting of a Ridgeway scene at Avebury by Anna Dillon, subscribed for by many of the members.  Ian responded thanking the contributors and all his past colleagues, and most specially his 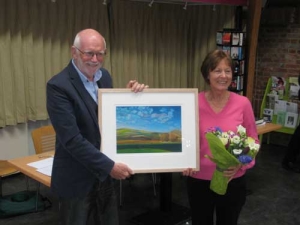 partner, Susan Suchopar, who had originally challenged him to take on the campaign against the off-roaders.  A bouquet of flowers for Susan was then presented, and photographs taken, amidst good wishes from all.

If you are a member of Friends of The Ridgeway, you can view the complete AGM minutes in the Member’s Area