The Launch of The Ridgeway Partnership: 19th June, 2015

All the time spent and hard work put in over the last two years came to an exciting culmination on Friday, 19th June, when the new Ridgeway Partnership was formally launched.  The many organisations and individuals involved in the discussions leading up to the formation of this new structure for The Ridgeway came together at Nuffield Place, by courtesy of the National Trust, itself one of the Partners, to celebrate the event.  The invited guests were welcomed to the Chilterns by Helen Tuffs, a Board Member of the Chilterns Conservation Board (CCB), and formerly of National Trust.  Helen noted that The Ridgeway forms a spine along the length of the Chilterns, linking many of the AONBs leading attractions.  The formation of the Partnership is timely, in this 50th Anniversary year of both CCB and the Chilterns Society.

Helen handed over to our own Ian Ritchie, in his new role as the first Chairman of The Ridgeway Partnership, who celebrated the importance of the new organisation for the future of The Ridgeway.  There are many exciting plans for improvements and promotion, despite the climate of austerity.  He commended the work put in by so many contributors, making special mention of Annette Venters, Access Manager of the CCB, for her quiet competence in making the practical arrangements, and of your Secretary for handling much of the documentation.

Our President, Lord Bradshaw, then took the floor and reminded us of all the past efforts by Ian and his team, and by so many others, to reclaim The Ridgeway from the off-roaders and from vehicle damage.  That struggle still continues, with new legislation under consideration for the new Parliament, and we must not let down our guard. Lord Bradshaw entrusted the new Partnership with looking after The Ridgeway and safe-guarding its future, and declared it formally launched. 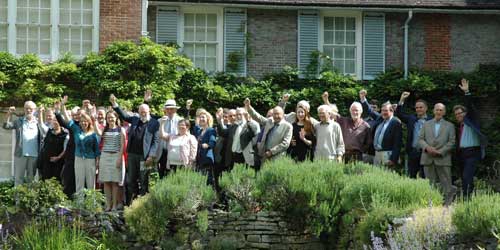