The Ridgeway Day: 10th May 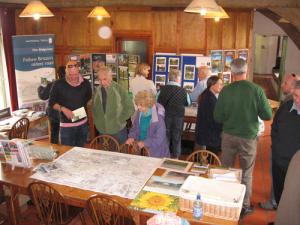 At 10.00 am on Saturday, 10th May, the Dining Hall at The Court Hill Centre was a hive of activity. Despite the ferocious weather forecast, it was sunny, breezy and bracing outside, but inside there was a hubbub of tables being moved around, chairs stacked, and exhibits unfurled and erected. Old and new friends were busy setting up banners and displays. Oliver and Rose from North Wessex Downs AONB as first arrivals had chosen to be in the window bay where your Committee usually meet, and were setting out a wealth of brochures and guides. Mark Bradfield from BBOWT (Berks, Bucks and Oxon Wildlife Trust) was out in the beech wood setting up his birds nature trail, while his colleague Michael Bailey from the BBOWT Letcombe Valley Reserve was preparing to show his lovely films and images. In the far corner, Dorothy and Valerie from the Vale & Downland Museum had laid out their historic Collecting Box, and geological and fossil specimens, while Annette from the Chilterns Conservation Board AONB had taken a space on the long table in the middle, sharing it with the detailed map of The Ridegway laid out by Steven Tabbitt, the Ridgeway NT Project Co-ordinator, and with Sarah Newman’s cards and prints.

Our favourite artists, Anna Dillon and Gus Mills, were both there and had displayed a range of tempting paintings, prints and cards of their work; and our stalwart Janet Hierons found a space to set out the Friends’ own cards for sale, featuring both of these artists’ paintings.   Chairman Ian Ritchie was directing operations and setting up a number of posters of Steve Davison’s Cicerone Guides, with a few copies of the North Wessex Downs and Ridgeway Guides for sale. The poster announcing Steve’s new Cicerone Guide to The Great Stones Way, due for publication in July, was of particular interest. Meanwhile, Secretary Jeff was setting up a Welcome desk in the porch, out of the wind.

All that was lacking was the entertainments for the day, and it wasn’t long before Howard Hill and his fellow musicians arrived, ready to serenade us. They had hoped to play outside, but the wind and the risk of later rain made this too risky, so they soon settled for the splendid Minstrels Gallery perch above the fray, from which their traditional English and Celtic tunes provided just the right level of sound, adding a buzz to the atmosphere without drowning out conversation. Finally, Lisa Townsend and her girls brought along their fascinating owls, and roosted together in the sunny porch, drawing much attention and interest.

It wasn’t long before the first visitors arrived, and Trustee Jim Gunter was preparing to lead his first walk along The Ridgeway to Segsbury Castle. A small band set off, with a few glances at the increasingly threatening sky, but his timing was perfect, arriving back at Court Hill Centre moments before the rain arrived. The showers stayed with us thereafter, but those who had braved the weather found much to entertain and interest them. The numbers were less than we had hoped for, alas, but the stay-at-homes missed an informative day.